We have been examining the riches of the Feast of the Circumcision as celebrated by the illustrious cathedral chapter of Sens, based on a MS. written under the auspices of the Lord Archbishop Peter of Corbeil. See the previous posts in this series: Introduction and First Vespers; Compline; Mattins, Lauds, & the Little Hours. This post will describe interesting elements in the Mass and Second Vespers of the feast.

After Terce, the canons prepared for Mass, singing a carol while the celebrant readied himself. This jocund conductus ad presbyterum is a bit of a grammar lesson, for each stanza begins begins with the word dies in a different case: dies (nominative), diei (genitive), diei (dative), diem (accusative), dies (vocative), die (accusative).

At Mass, as one might expect, each part of the Ordinary (Kyrie Clemens rector, Gloria II, Sanctus IV, Agnus Dei IV) was farced, even the Credo, whereof this is the sole attested example. The Gloria and Credo are troped in the style of the Pater noster and Apostles’ Creed at Compline and Prime, i.e. the text and music of each trope-line is a quotation, textual and musical from another liturgical piece.

With respect to the musical propers, however, only the Gradual includes a short trope in the form of a prose; the Sequence Laetabundus follows the Alleluia.

While the subdeacon prepares to read the epistle, the rest of the canons sang the famous carol Lux optata, and the epistle itself, sung to a special melody, alternates with a trope, most probably intoned by another cleric. The tropes are, like those of the the Gloria and Credo, textually and musically centonized.

While the deacon readies himself to sing the gospel, the canons again sing a conductus, and although the gospel is not farced, it is sung to special tone:

The canons were surely quite exhausted when time came for second Vespers, and so, after the solemn Deus, in adjutorium sung to the same melody as in First Vespers, they sang the hymn (curiously placed at the beginning), antiphons, and psalms without any tropes. Gaude Maria Virgo was the responsory sung after chapter, and here they did sing all the verses of this particularly prolix piece, concluding with the Marian prose Inviolata, which was extremely popular in the Middle Ages. A short sequence replaced the versicle, as at the other hours.

For the Magnificat, withal, the canons exerted one last effort, for it is set to four different antiphons! O beata infantia, they began, and followed with the first verse of Our Lady’s canticle. Then they sang the antiphon O gratissimi, followed by the second verse; then the antiphon O felices panni, followed by the third first; and then O presepe, with a long melisma of the O, and the fourth verse. They repeated each of these four antiphons after each verse until the Sicut erat, after which they rejoiced with a melismatic Alleluia. 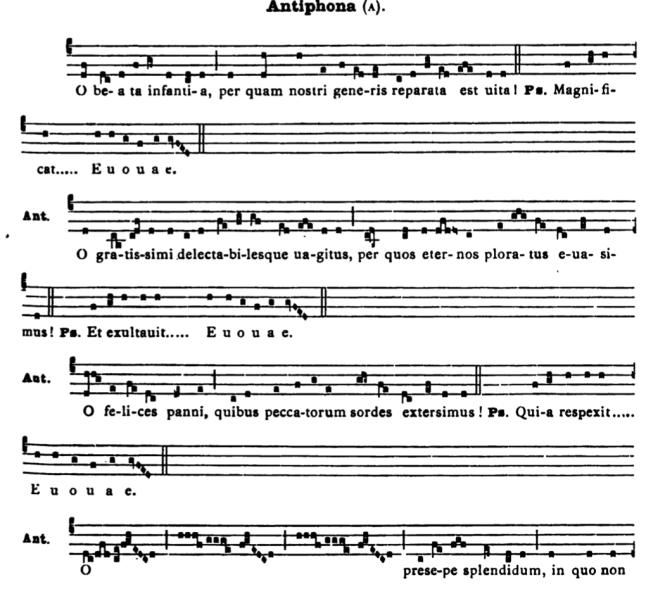 The MS. then provides three additional conductus, one to be sung while the bacularius (the head cantor, so-called because he held a staff, baculus) prepared himself for an office; one to be sung at an apéritif; and one for lunch.

At the end of the MS. is an appendix containing special troped melodies for the epistles of the Masses of St. Stephen, St. John, and the Holy Innocents, all of them centonized.

See the other posts in this series:

1. A Feast of Fools?: First Vespers
2. Compline
3. Mattins, Lauds, and the Little Hours
5. Why the Office of Peter of Corbeil was Suppressed
6. A New Years’ Apéritif with the Canons of Sens

A Sequence in Times of Pestilence

The History of the Folded Chasuble (Part 2)

The History of the Folded Chasuble (Part 1)

A Vestige of Ancien Régime Versailles in the Holy Land (3)

A Sequence for St Charlemagne

The Destruction of the Ancient Cistercian Rite