I am pleased to share this announcement of a new book published by Angelico Press, chapters of which have appeared on this blog.

In Praise of the Tridentine Mass and of Latin, Language of the Church
FR. ROBERTO SPATARO
Foreword by Raymond Cardinal Burke
Introduction by Patrick M. Owens 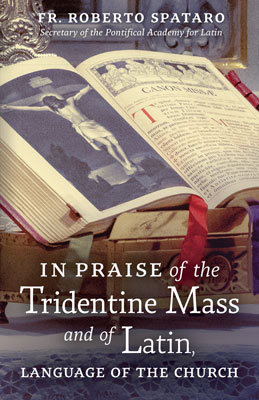 IN THIS NEW WORK, ROBERTO SPATARO shows how Pope Francis’s call for “joyful evangelization” finds a ready answer in an unlikely place: the august forms of the ancient Latin liturgy and the unchanging character of the Latin language. He shows how Latin, with its concise formulae and rigorous precision, has been the medium of Catholic—and indeed Western—intellectual life in the past and retains the power to bring unity and coherence to Catholicism in the future. With colorful images and copious examples, Spataro argues that the Latin Mass and its handmaid, the noble Latin language, which have served missionaries in the most varied and dire circumstances, might again be the most effective tools in the Church’s workshop for reevangelizing a fragmented world. In his foreword, Cardinal Burke notes that Latin is the key to an adequate knowledge of Roman Catholic history, liturgy, theology, and canon law. Also included is a detailed introduction by the renowned Latin educator and lexicographer Patrick Owens.

“While Fr. Spataro’s complex, balanced, humane, and nuanced reflections focus on the Latin language and its liturgical use in the Tridentine rite, he also explores its innumerable connections to almost every aspect of the life of the Church: not only the history and sources of her thought, doctrine, law, devotions, and experience, but also her contemporary needs for a rich spiritual life for clerics and laity, for beauty in her practices, for the pastoral care of souls, and for a renewed and vigorous evangelization.”
— ERIC HEWETT, co-founder and Executive Director of the Paideia Institute

“Fr. Spataro has put his wisdom, erudition, and characteristically Latinate eloquence in the service of the two Church treasures he is most competent to defend and promote: the perennial rite of the Mass and the Latin language. In doing so he confronts contemporary challenges to the Church with clear thinking and measured cheekiness. His message is straightforward: the Church’s linguistic and liturgical patrimony are as relevant to ours as to any generation.”
— JOHN PEPINO, Our Lady of Guadalupe Seminary

“In these talks Father Spataro not only gives us great insight into the value and meaning of the Traditional Roman Mass, he also sees its contemporary importance in the missionary effort to re-evangelize the millions of Catholics who have fallen away from the Church, and as a source and force for conversion to Christianity. His words on the beauty of the Mass recall those of Dostoevsky’s ‘Idiot’: ‘Beauty will save the world.’”
— FR. RICHARD CIPOLLA, Diocese of Bridgeport, CT

“Here is an apologia for the ‘Latin Mass’ and for the service of Latin. The former is a shorthand term for the Vetus Ordo, the Extraordinary Form, but Fr. Spataro thinks it neither old nor odd. Rather, he proposes that the Tridentine Mass is a living catechism which supports the New Evangelization that Pope Francis desires. The latter defense is offered for the sake of those who have forgotten how Latin has historically served the Church, suggesting its continued value as universal (supranational), precise, forceful in expression, and rich in nuance.”
— DAVID W. FAGERBERG, University of Notre Dame

FR. ROBERTO SPATARO, S.D.B., is a professor of ancient Greek Christian literature on the faculty of Christian and Classical Literature at the Pontifical Salesian University, and secretary of the Pontificia Academia Latinitatis. He has licentiate and doctoral degrees in dogmatic theology from the same university and has published in the fields of Patristics (especially Origen), Mariology, and Latin history, linguistics, pedagogy, and liturgy.

Key to Heaven and the Destruction of Hell: A Sermon from the Speculum Ecclesię on Roodmas

REPOST: Nothing More Befitting, More Apt, More Worthy: Honorius on the Readings of the Assumption

Honorius Augustodunensis’ Sermon to All Estates

REPOST: Ad Mariæ Gloriam: A Trope for Our Lady