The Lord Count of Montalembert.

Recall from our introduction that, in preparing his MS. for the Office of the Circumcision, the Most Reverend Lord Peter of Corbeil sought to codify the variegated uses that had arisen on the feast, with the twin aims of creating a beautiful and attractive liturgy for the day and safeguarding it from the more unsavoury customs attached to the kalends of January. The result was the felicitous liturgical spectacle we have been describing. How, then, did it come to pass that is was amputated by the venerable Chapter of Sens?

The surviving account-books of the Chapter from the 13th to the 15th centuries indicate that the Circumcision continued to be celebrated according to Peter’s ordinances during this time, since they provide for the expenses incurred in the day’s celebrations, including stipends for the precentor and the master of the boys’ choir, wine for the vicars and clerics, and Christmas gifts (usually more wine) for various dignitaries, including the boy bishop who presided over the celebrations of Childermas!

One can imagine how the wars and pestilences that ravaged France during the waning of the Middle Ages impacted the ability of the Chapter to finance these festivities, and in the 15th century the register attest that prebends ceased to be assigned for the celebrations of Childermas and the Circumcision, and indeed the Chapter ceased to provide funds for the former entirely.

This sad century, engulfed in a miasma of bloodshed, plague, and schism, begot a dour race of soi-disant reformist and humanistic churchmen who looked askance at the childlike joys of the preceding age. In 1435, many of them came together in the half-œcumenical Council of Basel, where they condemned boy-bishop ceremonies and the “feast of fools” on 1 January before making a Gadarene rush into heresy and schism. Three years later, the Most Christian Lord King Charles VII made the decrees of Basel into ecclesiastical law in France when he promulgated the infamous Pragmatic Sanction, and so prohibited the customary festivities of Childermas and the Circumcision at the same time as he usurped papal prerogatives over the Church of France.

Yet the celebrations proved enduringly popular, and on 10 March 1444, the Faculty of Theology of Paris saw fit to send a circular letter to the bishops and chapters of France attacking certain gross abuses which continued to occur during the “feast of fools.” On 4 December, the Chapter of Sens met and responded by insisting that the “service of the Lord’s Circumcision” be celebrated “devoutly and reverently as it is set out in the books for the same service,”[1] i.e. in Peter’s Office.[2]

In Sens’s suffragan diocese of Troyes, however, the Lord Bishop Jean Leguisé responded by trying to suppress the celebrations altogether. The collegiate church of St Stephen rebelled and, appealing to the authority of the metropolitan see of Sens, they defiantly performed their usual celebrations, culminating on 3 January 1445 with a play where the bishop and his two closest advisers were represented under the names of Hypocrisie, Faintise, and Faux-semblant and duly mocked.

Incensed, the Lord Jean wrote to the Archbishop of Sens, the Lord Louis de Melun, as well as to the King and the Faculty of Theology in Paris. Charles VII was only too happy to meddle, and ordered that the city authorities prevent any repetition these incidents.[3] The Lord Louis, meanwhile, was discomfited by the whole affair, and on 24 November 1445, he ordered the suppression of the feast of fools, dubbing it a “shameful clot” (flagitiosum coagulum) and ordering that all references thereto be effaced in the liturgical books. The Chapter obliged their bishop by cutting off, for the moment, all funds for the celebrations, and storing Peter’s MS. away in their treasury. 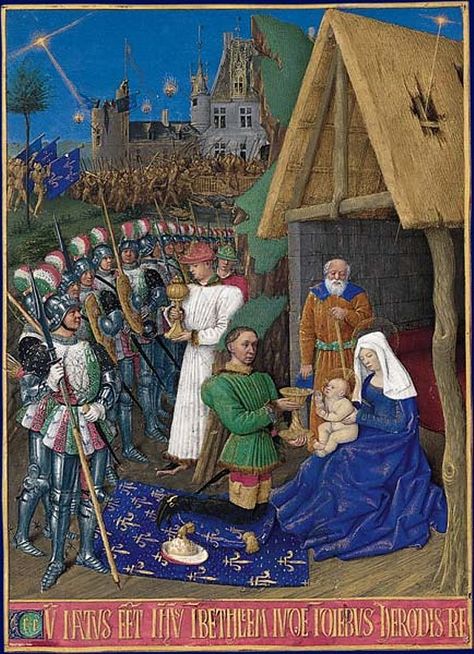 Charles VII venerates Our Lord’s birth with all due sobriety. His men are watching to make sure you do too.

But among the clergy and the faithful of Sens the sense remained that the legitimate celebrations of their forefathers were not to be classed together with the base excesses justly condemned by so many authorities, and in 1460 a provincial council found it necessary to crack down on these celebrations anew. Another council was held in 1485 and again repeated the injunction. Yet the very next year, the Chapter’s account-books provide for an expenditure of 50 sous “to keep the feast of New Years’ Day” (pour faire la feste du premier jour de l’an).

In 1511, the Chapter again reminded clerics that they were not to participate in the festum quod dicitur stultorum, including its plays, under pain of excommunication and privation of benefices, but at the same time it expressly permitted them “to perform and sing the divine service in the feast of the Lord’s Circumcision, as it has been celebrated of old in this church.”[4] The view had prevailed that the various condemnations of the feast of fools did not apply to Peter’s Office, which remained part of Sens’s liturgical tradition.

The Chapter repeated this permission in 1514, 1516, and 1517, but in 1521 it was again banned, and this was repeated in 1522, with the war against Spain adduced as an excuse. The next year the clerics’ complaints succeeded in obtaining permission to celebrate Peter’s Office again, so long as it was done honeste ac devote. The tide turned again in 1524, when “the faculty of celebrating the feast of the Circumcision as instituted by the late de Corbeil” was again rescinded.[5] And so things continued to go back and forth until a final prohibition in 1547 proved definitive. By now these sort of revelries were the object of fierce attack by the heretics tearing Christendom apart, and they never again recovered: in 1608, Jacques Taveau, historian of Sens, wrote of Peter’s Office as a practice “entirely fallen into disuse.”[6]

See the other posts in this series:

1. A Feast of Fools?: First Vespers
2. Compline
3. Mattins, Lauds, and the Little Hours
4. Mass and Second Vespers
6. A New Years’ Apéritif with the Canons of Sens

[2] Although it confirmed the practice that had arisen of drenching the precentor with water at Vespers; no more than three buckets were to be used, however (nec projiciatur aqua in vesperis super praecentorem stultorem ultra quantitatem trium sitularum ad plus). Outside the Church, the Chapter suffered the stulti to perform “other ceremonies” so long as they did not “hurt or injure anyone.”

[3] The chapter of St Stephen, although it never again resorted to such open defiance, continued electing a boy bishop on Candlemas until 1595, and droits continued to be paid for the feast of the Circumcision until the Revolution.

One thought on “New Years’ with the Canons of Sens (5): Why the Office of Peter of Corbeil was Suppressed”

Ritual for the Good Friday Procession

Rejoice, Jerusalem, & Celebrate a Feast, All You that Love Her: A Mediæval Sermon for Lętare Sunday

“Truth is Sprung from the Earth”: A Candlemas Sermon by Honorius

The Mass Commentary of Radulphus of Rivo