Fr. Pavel Florensky (1882–1937), Russian priest and polymath, theologian and mystic, sometimes styled the “Leonardo da Vinci of Russia” for the breadth of his intellectual accomplishments, left a great part of his writings for later generations to discover and publish after his secret execution in a Soviet forced labor camp in 1937. 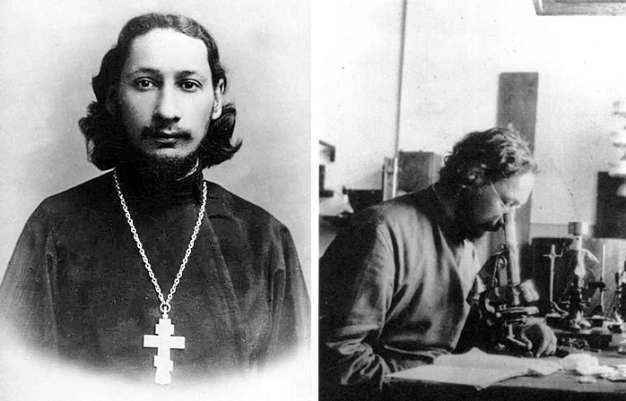 From his earliest writings,[1] Florensky had spent his life in a vigorous effort to vindicate the truth of the spiritual tradition of Russian Christianity before the whole cosmos of modern thought. His writing on icons is an emblematic example, wedding highly technical discussions on light waves and the physics of space with a creative recovery of patristic icon theology.[2] His most substantial work, Pillar and Ground of Truth: An Essay in Orthodox Theodicy,[3] is of seminal significance for a global understanding of Florensky’s larger project. Called variously a “metaphysics of love,”[4] a “sacral phenomenology,”[5] or “concrete metaphysics,” it is the main source for understanding Florensky’s neo-Patristic gnoseology.

Despite his towering stature in the Russian tradition, he remains little studied in English scholarship, partly because most of his writings remain unavailable in English, partly because the bold erudition of his works makes effective summary difficult.[6]

Of particular importance, his unfinished synthesis on the Christian liturgy, The Philosophy of Cult, remained unavailable inside Russia until 2004 and everywhere else until its first international edition was published in Italian in 2016.[7] This broadly speculative work seeks to establish the study of the phenomena of religious cult as a discipline in its own right, in fact, as the field of research that properly underwrites all other philosophical and empirical disciplines.

The Philosophy of Cult began as a series of lectures given in Moscow at the Academy of the Society of Professors from 1917-1918 and Florensky expanded and revised these manuscripts throughout his life. The final result is therefore an incomplete and sometimes fragmentary collection of essays on various themes, a “lineaments” of what Florensky, conscious of his own limits and the novelty of the subject, hoped would evolve into a proper branch of philosophical study in its own right. The unfinished nature is evident in the uneven texture of the argument, which in places proceeds in unconnected flashes of intuition broken off without rigorous treatment. Readers should consult the Italian edition for further scholarly introduction to the problematics of the text.

In his introduction to the Italian edition, Natalino Valentini places the work in the context of 20th century studies of religion. The century of anthropology and historical Biblical scholarship, symbolism and the Liturgical Movement, yielded many probing studies on the nature of the liturgy using various methodological approaches. But Florensky’s work is unique for the breadth and the integrity of its method, making his recovery a pressing concern for theology:

“[In the twentieth century] there are a number of splendid theological treatises on the liturgical mystery and its symbology (R. Guardini, H.U. von Balthasar, O. Casel, E. Przywara, H. de Lubac, J. Ratzinger, etc.). And yet few (perhaps with the exception of the writings of Guardini and the brilliant intuitions of Simone Weil and Maria Zambrano) have tried to explore the essence of the Christian liturgical cult using a rigorously philosophical method. This challenge was met by Florensky, who considered it from a point of view at once logico-phenomenological and ontological, taking into account both the anthropological basis and the sapiential-mystic view of the divine mysteries…illuminated by Scripture and the living Tradition of the Church, all in a constant critical dialogue with modernity.”[8]

Taking inspiration from Romantic and Idealist reactions to the Enlightenment, especially Schelling and Hegel, the Slavophiles attempted to offer a root and branch critique of modern Western culture from a unique Russian perspective. Convinced that it was Russia’s “national task” to redeem the West from its religious and philosophical errors, they opposed a distinctly Orthodox, integrally Christian worldview against a European intellectual milieu they viewed as fragmented and colonized by heresy.

Pioneers such as Khireevsky, Khomyakov, Soloviev and Bukharev proposed philosophies and theologies creatively elaborated from the Greek Patristic and Russian traditions and centered on a basic cluster of terms. Rejecting individualism and rationalism, they developed a more communitarian theory of “integral knowledge,” expanding reason to include spiritual Absolute Spirit of God, in turn accessible only through lived experience within the orthodox communion of the Church, a communion of love conceived on the Jerusalem model—sobornost. In Florensky’s own words, “living religious experience [is] the sole legitimate way to gain knowledge of the dogmas.”[10]

In his foundational doctoral thesis, Soloviev had urged what became the shared inspiration of Russian thought, “the need for a synthesis of faith and reason for further progress in creative thinking.”[11] Because Western modernity had “reached its limits,” “there was a need for a distinct, fresh approach, a synthesis of scientific or formal and theological knowledge that is of the Absolute.”[12]

It would not be unfair to describe the Slavophile project as a modern updating of the traditional Greek polemic against Western Christianity. In the modern version, the West’s spiritual disunity begins in the act of inserting the filioque, when the pope broke the ancient communion of the churches and put himself above the received tradition in an act of voluntary autonomy. No longer nourished in Trinitarian union, the dissociative tendencies of fallen reason, inherent already in the Roman Church, come to fruition in Protestantism and the fully autonomous cultural formations that spring from it.

Florensky’s philosophy of cult should be seen in this light as the quest, part of Russia’s “national task,” to propose a total alternative, a complete reclamation of philosophy and culture for the orthodox Christian communion. Florensky views Western rationalism, epitomized in Kant, as an explicit “heretical reconstruction”[13] of the inherited Platonic tradition. By appropriating Platonic categories and intentionally inverting them, the Protestant Kant turns philosophy into a weapon against the Christian liturgical worldview and into an idolatrous cult of self-positing, autonomous reason. By exposing this idolatrous posture and at the same time pointing out the ultimately religious, liturgical geneology of rationalist philosophy, Florensky shows that philosophy cannot escape its own origins, and must eventually return to them: the rebirth envisioned by Soloviev.

In short, Florensky reads modern philosophy as an ecclesiological heresy and the plight of modern art and science as the natural result of the spiritual disunity that comes with schism from Trinitarian communion. Into this well-trod ground of Slavophile polemic and his own novel neo-Patristic mystical approach, Florensky plumbs the resources of modern anthropology, phenomenology, offers an original linguistic analysis of Kantian philosophy that tries to prove that escaping from the cultic framework is an impossibility for Western philosophy after Plato. Philosophy is cult.

[6] Recent exceptions include chapters in Johannes Miroslave Oravecz, God as Love: The Concept and Spiritual Aspects of Agape in Modern Russian Religious Thought (Grand Rapids, MI, Eerdman’s, 2014), pp. 264–291; and in Andrew Louth, Modern Orthodox Thinkers: From the Philokalia to the Present (Downer’s Grove, IL: Intervarsity Press, 2014), pp. 27–41; and consideration in Jennifer Martin, Hans Urs von Balthasar and the Critical Appropriation of Russian Religious Thought (Notre Dame, IN: University of Notre Dame, 2014). For the more abundant literature in European languages, the reader is directed to the bibliography.

[13] The concept of “heretical reconstruction” is not Florensky’s, but borrowed from Radical Orthodox thinkers such as Milbank and Pickstock. Alisdair MacIntyre’s theory of “severence” and Taylor’s “mutation” describe essentially the same critique of modernity, as a development in more or less conscious opposition to the classical-medieval synthesis.

Nothing More Befitting, More Apt, More Worthy: Honorius on the Readings of the Assumption

A Mediæval Sequence for the Transfiguration