The city of Vienne in the Dauphiné (Vienna Allobrogum in Latin) was a Roman colony and one of the most ancient cities of Gaul, and conserves a great number of antiquities. It is built in a semicircle in the valley between three mountains on the bank of the Rhône (Rhodanus) and the river Isére (Jaira).

Vienne was not only a Roman colony but by all accounts the headquarters of the prefect of the Prefecture of the Gauls, being named before Lyon in the Notice of the Western Empire and in the letter that the two churches of Vienne and Lyon wrote to the churches of Asia and Phrygia about their first martyrs, as reported by Eusebius in his Ecclesiastical History (5.1).

The Romans favored Vienne very much, as is evidenced from the monuments that still remain there. The sundry beautiful ruins of fortresses, amphitheaters, aqueducts, baths, caves, pyramids, and ancient inscriptions attest to its original glory. The city today is almost buried in its ruins. There is, however, no city in France that still preserves so many ancient monuments.

At the city gate, in the direction of Lyon, there is a tower dubbed la Tour de Pilate, since, according to popular tradition, Pilate ended his days there. The truth of this is not certain. It is true that Ado, archbishop of Vienne, says in his Chronicon that Pilate was exiled to Vienne and ended his days there, taking his own life out of despair. One would wish for a more ancient testimony to this than a 9th-century author.

On the Church of St. Maurice 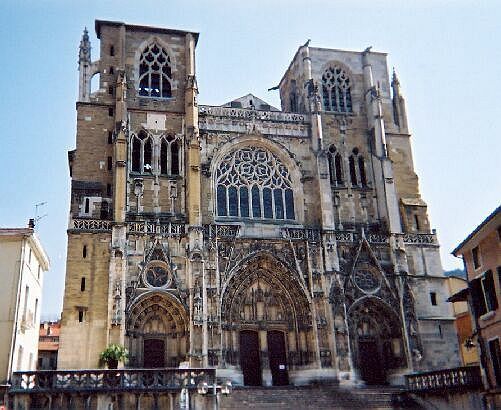 The Blessed Sacrament is reserved in the cathedral church at the foot of the great rood in the jubé sub titulo crucis, along the inner wall of the choir, and a lamp hangs in front of it. There is a parish altar in the jubé above the Blessed Sacrament, where masses are celebrated after Prime on fasting days (formerly after Sext) on the vigils of certain saints.

The archiepiscopal throne for ordinary days is at the end of the last stall of the choir, as in Rouen. It is very simple, higher by two or three feet than those of the canons, with its own stall and partially covered by a small woodwork pediment, without a dais below.

The choir, recently constructed in very high, very beautiful woodwork, has are only two rows of stalls. The cantors who are priests do not wear the almuce with the canons, and sit in the upper row. The second is occupied by all the others except the clerks and choir boys (or clergeons), ten in number, who do not even have a stool to sit on, and remain standing for the whole office.

The boys wear a black cassock and are tonsured like all ecclesiastics who say even part of the Office in public. Their surplices and those of the canons and cantors are extremely short with a lace hem around the neck and above it a round collar with fastening like that of a coat or a frog fastener. The sleeves are closed with a hem like those of the canons of Lyon.

I am not entirely certain when they placed nine lecterns in their choir, but it is certain that they once chanted from memory, and that in 1524 practices, called the Recordations, were held every Saturday by the minor choir.[1] 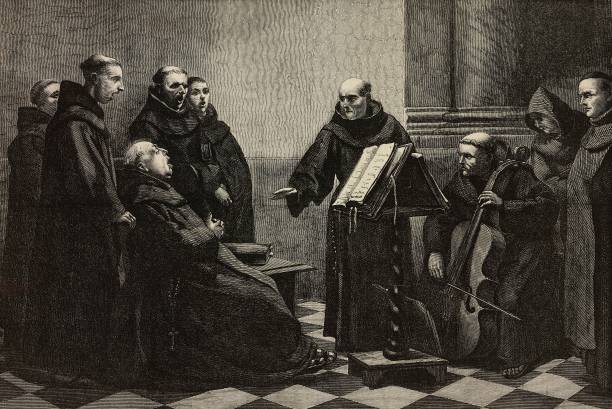 They never chant two minor offices one after another. They say Prime at 8 in the morning, Terce at 9 before the conventual mass, followed by Sext, None at 2 p.m. (which is not sung on major feasts), and Vespers at 5 p.m. The new Breviary of Vienne recommends this practice. It used to be forbidden to say hours of the Divine Office back to back (as we shall see at the end of this account) and the spirit of the primitive Church was to say the major and minor hours every three hours or thereabouts, and the three nocturns separately during the night, Lauds at dawn, Prime at sunrise, Terce at 9, Sext at midday (the hour is even called Meridies in the Ordinaries of Lyon and Soissons), None at 2 or 3 in the afternoon, Vespers at 5 or 6 as at the Collège de Cluny in Paris, and finally Compline immediately before going to bed, as most of the religious still do.

On major feasts at St. Maurice of Vienne, Compline is chanted by only the sacristan and two or three chaplains who assist him. The choir does not attend.

In Thursday Vespers they do not repeat Quoniam in aeternum misericordia eius after each verse of Psalm 135.

In all the offices, when the celebrant has chanted the Deus in adiutorium meum intende, all respond with a lower fifth Domine ad adiuvandum me festina, Gloria Patri, etc, until the Alleluia which they chant higher, and which serves as the antiphon for the small hours. As at Lyon there is never a hymn except at Compline, as is the case in all our churches on the last three days of Holy Week and during the Easter Octave.

At masses when the choir is present the celebrant, deacon, and subdeacon wear mitres on solemn days, and never wear the almuce to the altar. The subdeacon thurifer is in alb and tunicle, and the two choir boys or clergeons bearing the candles are in albs.

The deacon and subdeacon approach the altar and do the confession with the priest, after which the subdeacon and the thurifer remain almost entirely at the right side of the altar in cornu Epistolae watching the priest from the side two steps away from the altar. The deacon stays behind the priest, either to his side or in the center of the altar, but at a distance of five or six steps. He only approaches when it is necessary.

The candle-bearers are do almost the same things and ceremonies as at Lyon.

After the Gospel has been read, and during the Credo, the subdeacon brings the open Gospel book to the canons to be kissed, just as he brought it to the celebrant.

After the celebrant has incensed the oblata and the altar, he himself does the great incensation around the whole altar (which the deacon does in Lyon and Rouen), while the deacon raises his chasuble from the back with both hands. The priest begins this incensation in the center of the altar, then moves to the Gospel side, then goes around the back and returns by the Epistle side. Then he is incensed by the deacon.

The subdeacon, after having taken the paten, goes to the front of the choir until the Sanctus. At the Sanctus he goes behind the altar until the Nobis quoque peccatoribus, when he returns behind the deacon and gives him the paten. The deacon presents it to the priest or the archbishop.

When there are several subdeacons, they follow the officiating subdeacon in all his movements.

During the Pater, the priest elevates the Host and the chalice at in coelo, and kisses each of them at in terra, as in Lyon, in conformity with the letter of the prayer.

Everything else is done mostly the same as at Lyon, except that the deacon faces north to sing the Ite missa est. When the priest has given the blessing and recited the Gospel In principio, he returns with the other ministers in the same order they came.

On major feasts when the archbishop celebrates the Mass, he has six priest assistants with him, seven deacons, and seven subdeacons—the illustrious current archbishop re-established this custom on Pentecost 1697—and formerly seven candle-bearers who are no longer seen except on Easter day. The six priest assistants go in front of the canon deacon and subdeacon, as the six assistant deacons go in front of the main subdeacon, who is also a canon. The archbishop ascends his chair as at Lyon. It is at the back and in the middle of the coquille or apse.

[1] Or better, Memorizations. This was when the choir met to learn the antiphons, which they had to learn by heart.

A Vestige of Ancien Régime Versailles in the Holy Land (3)

A Sequence for St Charlemagne

The Destruction of the Ancient Cistercian Rite

A New Years’ Apéritif with the Canons of Sens (6)

New Years’ with the Canons of Sens (5): Why the Office of Peter of Corbeil was Suppressed

New Years’ with the Canons of Sens (4): Mass and Second Vespers

New Years’ with the Canons of Sens (3): Mattins, Lauds, and the Little Hours

New Years’ with the Canons of Sens (2): Compline