“But there are six orders of crosses, because the world is made in six days, and Christ’s body is restored by the same six-fold number.”

This section of Gemma Animae‘s commentary on the Roman Canon is organized around the several sets of signs of the cross made over the offerings. The multiplication of these signs of the cross was a medieval phenomenon that inspired a raft of mystical interpretations and became a stock object of ridicule for critics of medieval liturgy.

Scholars say that the primitive meaning of these signs was indicative, pointing out the offerings as they are mentioned in prayer: Haec ☩ dona, haec ☩ munera, etc. Honorius seems to go far beyond this literal sense, interpreting them through layers of Scriptural themes.

He takes them as place-markers, divisions of the larger plot of the Canon, which he understands as a story, a recapitulation of salvation history in six acts. The life-giving Cross stands at the center of this history, following humanity through every age. Along the way, every generation is united to the Cross (crux) through its cruciform suffering (cruciatus).

Though we might disagree with the way it has been grafted onto the Mass ritual, I think his account of sacrifice is rather theologically astute, not ridiculous at all. The way it integrates the creation, redemption, and passion is deeply Scriptural and soundly orthodox.

As John Behr has observed, from Genesis’s “Let us make man in our image and likeness” to John’s “Behold the Man,” history as the story of God’s creative action reaches its summit in the God-man Christ. In the Canon of the Mass, the Church re-performs this creative action, taking matter from the earth, breathing upon it with the Holy Spirit, and thus making sacramentally present the New Adam, the fairest of the children of men, and along with Him His Body the Church.

From a theological point of view then, our Canon is the daily-repeated completion of God’s creative act in the Church, every day the Incarnation made present and efficacious on the altar. So it makes sense why Honorius sees a special significance in the “Amen”–God’s creative word, the Hebrew equivalent of the Latin “fiat”–that ends the Canon:

“We say Amen to confirm the whole sacrament because through this word the world is created. For Amen means fiat, the word God used to create the world when he said: Fiat lux, etc.” (GA, Ch. 99).

Further, Honorius’ historical vision is taken straight from the Book of Revelation: history as the patient com-passion of Christ’s saints in the hope of glory. Honorius makes the connection between the Cross (crux) and the “sufferings” (cruciatus) of the Old and New Testament saints explicit in the chapters below.

Ultimately we are free to dispense with the literal particulars of Honorius’s commentary: the six orders, the five-fold divisions, etc., etc. But in what is most important for theological understanding, I think Honorius has given a deeply satisfying account. What is the sacrifice the priest designates with signs of the cross? Medieval commentary can help us regain a vision of the full cosmological grandeur of the sacrificial act, a vision firmly based in Scripture and the Fathers. 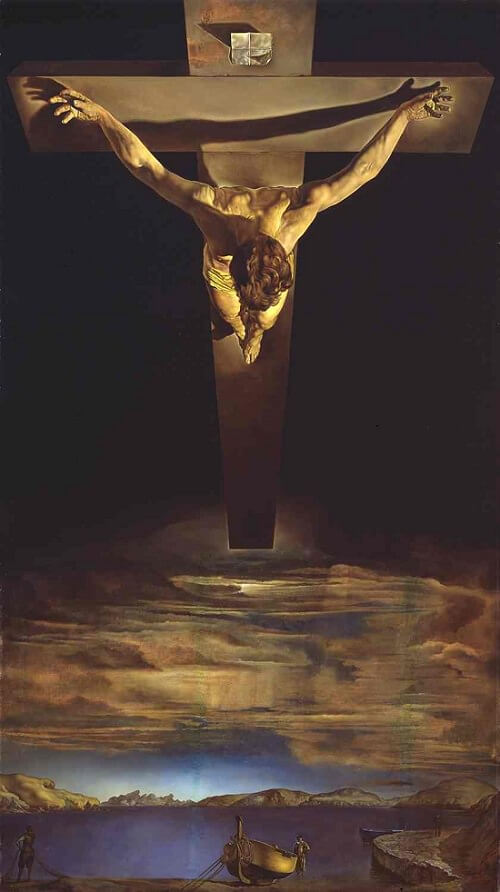 Chapter 49
On the Cross

This sacrament (sacramentum tantum) is accomplished through the Cross alone, because Christ hung on the cross as the sacrifice of the Father, where he redeemed the world in a four-fold manner. But there are six orders of crosses because the world is made in six days, and Christ’s body is restored by the same six-fold number. For a blessing is given through an odd number, which cannot be divided into two equals. We make either three crosses, and thus express our Trinitarian faith; or we sign through five crosses, and denote the five-fold passion of Christ. Through these six orders of crosses we comprehend the whole history of the world, expressing it as a unity united through the cross of Christ.


Ch. 50
On the First Order and the Three Crosses

In the first order we make three signs of the cross at Haec dona, an allusion the first age before the Law, which had three phases: one ran from Adam to Noah, the next from Noah to Abraham, and the third from Abraham to Moses. The just men in this age had faith in the Trinity and made tribute to Christ from afar through their sacrifices, and also bore many terrible sufferings for their faith. For in the first age, Abel offered Christ in the form of the lamb and for his sake suffered the pain of death. In the second age, Melchisedech offered Christ’s Body and Blood in bread and wine and for his faith in Christ he suffered the ravages of war with the kings of the Gentiles. In the third age, Abraham sacrificed Christ in the person of Isaac, slaughtered the ram, and bore various hardships for his faith.

Ch. 51
On the Second Order, and the Five Crosses

In the second order we make five signs of the cross, at Benedictam, ascriptam, portraying the time of the Law, in which the just men portrayed Christ through the five sacrifices of the books of the Law and suffered many torments for their faith.

Five is divided into two parts, three and two, just as this age is divided into two parts. One was from Moses to David, another from David to Christ. The number three signifies the judges from Joshua to David, the kings from David to the Babylonian captivity, and the princes from Zorobabel to Christ. The number two on the other hand signifies the priests and prophets, among them Moses, who immolated Christ in the form of the Paschal Lamb, and according to the Apostle suffered many things for his faith in Christ, whom he preached in the Law (Hebrews 11).

In the third order we take bread in our hands and bless it, signifying the time of grace in which Simon received the new-born Christ into his hands as the living bread and blessed him with great joy. Next we raise the chalice and bless it, portraying the time of the Supper, in which Christ raised up bread and wine in his hands, blessed them, and gave them to the apostles as his Body and Blood. For this reason to this very day when the words of the Lord are recited in this order (in ordine), the bread and wine are changed into his Body and Blood.

In the fourth order we make five crosses at Hostiam puram, recalling the time when Christ received five wounds on the Cross and redeemed the five ages [1].

Ch. 54
On the fifth order and the three crosses

In the fifth order we say three signs of the cross at omnia bona creas, sanctificas, alluding to the Body of Christ, viz. the primitive Church, which received the Trinitarian faith and withstood many torments for Christ.

Ch. 55
On the sixth order and the five crosses

In the sixth order we make five crosses at per ipsum, expressing the Body of Christ, this time the Church gathered from amongst the Gentiles who reverently received the five-fold Passion of Christ and patiently bore various sufferings in imitation of it.

Ch. 56
On the five orders of crosses

Thus through five orders of crosses we symbolize the five ages of the world saved by the Cross and by the Body of Christ. Per Christum Dominum nostrum is said five times in the Canon because the world is redeemed through Christ’s five wounds. In the sixth order the chalice is touched with the oblata because in this way Christ is shown to have drunk the chalice of his Passion on the Cross for the sake of all at a certain age in time. When we say Per ipsum, we make four signs of the cross over the chalice with the oblata and a fifth on the side of the chalice, because thereby we make known that Christ received four wounds on the hands and feet and a fifth in his side. When the body of Christ has been confected, we touch the lip of the chalice, and in this way we signify that when the body of the first man had been formed, God breathed the breath of life into his face and from him brought the woman to life (Genesis II). In a similar way God, per quem, cum quo, in quo omnia, breathed the Holy Spirit into the face of the perishing human race and out of it gave life to the Church through his Body. The chalice is touched in four places because the human race, scattered to the four corners of the world and brought to life by the four parts of the Cross, will be raised to life through Christ at the end of the world. 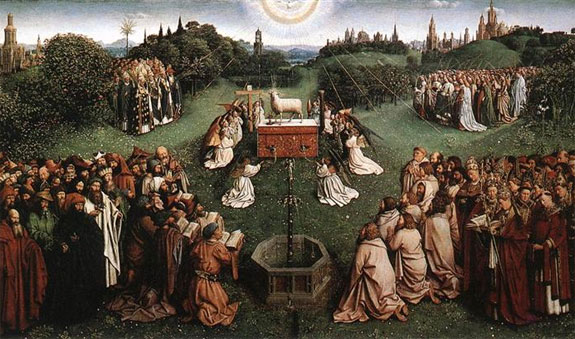